My involvement with Tales of the Buffoon has been long, multifaceted, and obsessive. It grew out of my love for the music of Sergei Prokofiev and the folktale that was used as the basis for his obscure Constructivist ballet of the 1920s, Le Chout. The title is a French romanization of the Russian word шут, meaning “buffoon.” The story, a mean little episodic scrap of a thing, intrigued me with its ultra-black comedy, violence, trickery, cross dressing, and goat-murder.

My first interpretation of this material was a primitive pen and ink “comic strip” that I created for an art magazine for the alternative gallery, Studio Diabolique. Using some of the episodes from the original folktale, I began writing my own, receiving invaluable assistance from my father whose dry sense of humor was spot-on. The magazine never saw the light of day, but the owners, Stephen and Robert Carb, generously self-published a small run of the ten tales as a comic book.

In the meantime, I had been creating large-scale Buffoon paintings, and showed them in a solo exhibition at Nexus, a Philadelphia co-operative gallery. I was living and breathing buffoons by this point, and became obsessed with the idea of recreating the collaborative fever of The Russian Ballet by somehow mounting my own dance production. I was no Diaghilev though, and knew little of the modern dance world.

Enter dancer/choreographer Anne-Marie Mulgrew, a friend whom I sought out for advice. To my utter surprise she offered herself as choreographer. A brief search landed us in the office of Claude White, composer and conductor at the University of Pennsylvania, who eagerly signed on as well. Before we knew it, armed with a freshly minted Pennsylvania Council on the Arts grant, we were deep in the collaborative process. Tales of the Buffoon, a full-length stage work, premiered at the Painted Bride Art Center in February 1990 with sets and costumes, an electronic score with a live percussionist, and eight dancers (budget considerations reduced the 7 other buffoons and their wives to 3 each). 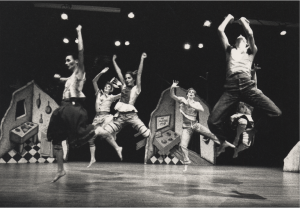 Documentary filmmaker Glenn Holsten, at the time a producer at WHYY-TV, the Philadelphia public television station, was in the audience and later contacted us and extended an invitation to collaborate with him. Glenn was working on the Spotlight series, a program of shorts funded by the Pew Charitable Trusts highlighting the arts in Philadelphia by pairing directors with artists to help them explore the medium of TV in short spot films. He had a novel idea to marry the comic book Tales of the Buffoon with the stage version Tales of the Buffoon. Using “green screen” special effects, the dancers performed inside a two-dimensional world of my black-and-white pen and ink drawings. The video was broadcast repeatedly on National Public Television.

Then, in 2005, on a lark, I began experimenting with digital software to make corrections and add color, texture, and lighting effects to the old black-and-white Buffoon strips. About the same time, I stumbled upon a set of long forgotten notecards in a drawer outlining a complete, novel-length version of the Tales and I began to write.

Watch an 8 1/2-minute television interview piece
on the subject of Tales of the Buffoon as a segment
of the WHYY-TV Friday Arts program here.