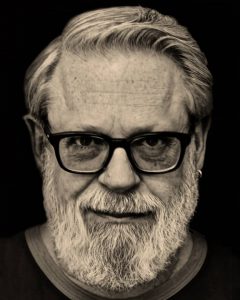 I was born Mitchell Taylor Gillette, April 16th, 1956, in Springfield, Vermont. As a child I showed a propensity for drawing, and with encouragement from my parents, a wonderful cartoonist great-uncle, and some teachers, I stuck with it, taking lessons at the local art center. In 1974 I moved to Philadelphia to study illustration at the the Philadelphia College of Art (now The University of the Arts). But my painterly leanings proved too strong a pull, and after two years I left commercial art behind and transferred across the city to the Pennsylvania Academy of Fine Arts in pursuance of their highly academic curriculum in the field of painting.

After schooling I showed work extensively in Philadelphia at various venues: Studio Diaboliques, Nexus Foundation for Today’s Art, and The Snyderman Gallery, which last represented me. Besides painting, I have created sculpture, installation, and performance works, including live tableaux of my own paintings. I formed a collaborative group with choreographer Anne-Marie Mulgrew and composer Claude White to produce a dance production based on my comic, Tales of the Buffoon, which premiered at The Painted Bride Art Center. We were then invited by director Glenn Holsten to collaborate on a short video version of the same piece for public television station WHYY as part of the Pew Charitable Trust funded Spotlight series. The video, in which the dancers performed inside my drawings using special green-screen effects, later aired nationally and went on, as part of the series, to win a local Emmy. The composer, choreographer, and I continued to work together to create stage works which were performed in Philadelphia and elsewhere, including DIA Art Foundation in New York City.

In addition to fine arts, I created the branding for the Philadelphia optical shops known as Modern Eye, designing the décors, logos, web presence, advertising campaigns, and window installations, all of which have helped bring the shops to award-winning national attention in the industry and prompted inclusion in the fashion-branding textbook, Brand/Story by Joseph Hancock, Drexel University, in which Modern Eye serves as the first example in the book, complete with one of the images on the facing page.

For the past fifteen years I have been solely at work on a 300-page graphic novel, also entitled Tales of the Buffoon, which is very near completion. And I will soon be releasing a recording of original classical piano music performed by pianist Tom Lawton.

I live and work in South Philadelphia and Villas by the Bay, New Jersey, with 1 – 3 dogs at a time and Chris, my hero and partner since 1989.